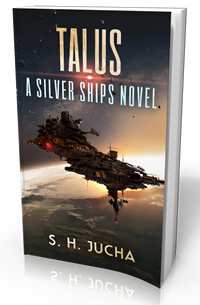 The sisters, whom the SADEs created during the fight to defeat Artifice, possess advanced tech. They construct warships, the vaunted Tridents, to protect their new society. However, despite the support of the enormous Toralian battleships, the nascent Talusian fleet is no match for the numerous ships that ring the planet.

The envoys’ lists of demands against the Talusians are long, and the envoys compete to be heard, complicating the negotiations. The chaotic conditions buy the Talusian president, Sargut, time to send an urgent plea for help. His message requests the assistance of the Omnian fleet.

The city-ship, Our People, and two Trident commands make preparations to sail for Talus to relieve the beleaguered Talusians. But the fleet must solve a dire local emergency before it can get underway.

Nata, a new lieutenant, makes a terrible misstep. She visits Sawa, the Dischnya home world. Her investigation results in her capture by an underground nest. Now the Omnians must recover Nata before she comes to harm.

A shocking discovery is made on Sawa, and Nata’s rescue becomes a race to save a dying Sawa nest. Omnian Dischnya take matters into their own hands, freeing the fleet to sail. Having resolved one exigent issue, the fleet arrives at Talus only to confront a much greater problem.

(Read an excerpt from Talus, A Silver Ships Novel. Download the Full Glossary.)

The MP3 and CD audiobook versions are available on Audible and narrated by the Nicole Poole.