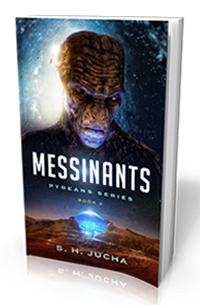 Pyre is a volatile planet. Its surface belches heat and noxious gases, forcing downsiders to inhabit domes. But Pyre’s instability isn’t limited to its geology. The colonists, who were marooned in the system hundreds of years ago, have endured a tumultuous history.

Exploring Triton, Pyre’s third moon, spacers inadvertently activate an alien dome. When nothing came of it, they combined their mining ships with the Honora Belle, the aging colony vessel, to sling slush, frozen gases, at Emperion, Pyre’s second moon.

Nearly a year later, the Belle’s bridge crew, who monitors the alien site, is alarmed, when they witness a bright blue light shoot from the dome’s platform and merge with the shield. The alien site isn’t an entertainment stage, as Captain Jessie Cinders had facetiously mused. It’s a gate, and aliens have arrived.

Much to the consternation of the duplicitous downside governor and station commandant, the spacers, who triggered the dome, journey to Triton to meet the arrivals. Discussions with the aliens leads Jessie to understand these entities might be responsible for the destruction of Pyre, and they’re offering to resurrect the planet out of remorse.

The commandant and the governor insist the aliens wish to repair Pyre for themselves, and the citizens are confused about who might be right. Only time will tell which groups prove to be correct. The danger lies in the possibility that the spacers are being fooled and the aliens are seeking to conquer the planet. In which case, humans might learn the truth too late. Read an excerpt from Messinants.

Available in audiobook on Amazon and Audible and narrated by Nicole Poole.