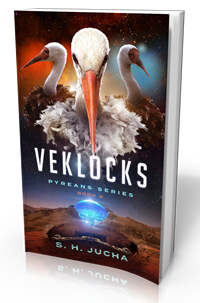 A triumvirate of Veklocks, emissaries of the Tsargit, the alliance governing body, negotiates with Harbour, the Pyrean envoy, about critical projects the Pyreans need. But it’s possible that the Veklocks ask for too much in return.

The Veklocks require the Pyreans to explore the extent of the Colony’s usurpation of domes. The Colony is composed of two insectoid species, the grays and the reds. They’re aggressive three- and five-meter long insectoids with venomous pincers that live for the expansion of their race. The Pyreans already lost one member of their team on their first exploration and are hesitant to meet the Colony again, unless they’re better prepared.

Harbour and Jessie, her advisor, have an opportunity to demand a high price from the Tsargit through their negotiations with the Veklocks. But will it be worth the risk to their team to bring back the information the council demands?

After negotiations are concluded, Harbour and Jessie are shocked to learn that the Tsargit council is not to be trusted. The council uses the Veklocks as intermediaries so they might later deny various aspects of the agreement as having not been fulfilled.

Before the journey to encounter the Colony, Harbour requests a plebiscite to restore the original conditions of Pyre’s government. If passed, and the Pyrean downsiders lose the subsequent election, it could spell the end of their power. The leader of the downsiders’ council is determined not to let that happen any circumstances. Read an excerpt from Veklocks.

The MP3 and CD audiobook versions are available on Amazon and Audible and narrated by Nicole Poole.