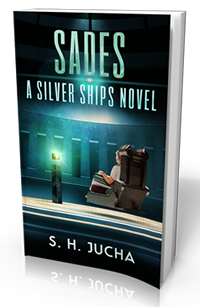 Dangerous forces are at work across galactic space that the Omnians are attempting to stabilize, but their resources are severely strained.

The SADEs, self-aware digital entities, express to Alex Racine and Renée de Guirnon their desire to know the method of their creation. Alex and Renée, the Omnian co-leaders, want to obtain the knowledge for the SADEs, who are humans’ closest allies.

Alex, Renée, and Julien, a friend and a SADE, board the giant city-ship, Freedom, which sails for Méridien, the home world of the far-reaching human colonies of the Confederation. They have a long overdue appointment with House Brixton, the Méridien group responsible for creating the SADEs. However, Shannon Brixton, the House Leader, is expected to zealously guard the secrets of the SADEs’ origination.

While at Méridien, Alex receives an urgent message requesting help in alliance space, where a small group of Omnians and Earthers battle the Colony, a race of insectoids, which is subsuming planets.

To complicate matters, a rogue battleship fleet left the federacy, bypassed the human colonies, and is searching among the alliance worlds for a habitable planet. If an unoccupied world isn’t found, they’re prepared to evict the inhabitants by force.

In the wake of Alex’s exit from Omnia for alliance space, Hector is left in charge of the Omnians’ second fleet. The SADE temporarily carries the mantle of protector of human colonies and allied worlds.

For the Omnians, life and its challenges couldn’t be more precarious, or could they?

(Read an excerpt from SADEs, A Silver Ships Novel. Download the Full Glossary.)

On Amazon in e-book and softcover editions.

The MP3 and CD audiobook versions are on Amazon and Audible and narrated by Susanna Burney.