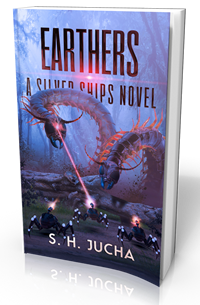 Omnians, Earthers, and alliance members are fighting the Colony, the horde of sentient insectoids that threaten alliance space.

The Colony has had centuries to expand through the network of domes built by the Messinants, an ancient race. The domes’ Q-gates allow the insectoids to invade planets through their inventive use of rings, which extends the power of the domes.

It’s Omnian superior technology that gives a temporary advantage to the peaceful alliance members who lead the fight to retake their planets.

Omnian warships and fighters, Tridents and travelers, possess beam weapons to destroy the Colony’s shuttles and transports. However, the Colony escalates, turning its transports into deadly explosive traps.

In the past, the few alliance races that fought back could barely hold the line against the Colony’s seemingly never-ending incursions. Now, Jess Cinders leads a group of dedicated veterans armed with explosive dart weapons borrowed from the Loopah race.

Again, it’s the Omnian advanced tech that changes the dynamics in favor of the veterans. Engineers upgrade an invention first used decades ago. It’s a shadow, a multilegged avatar, with a mounted laser.

Unfortunately, for those races fighting to halt the Colony’s expansion, the insectoids aren’t willing to retreat. They fight back with even deadlier tactics that can take the lives of the unwary.

(Read an excerpt from Earthers, A Silver Ships Novel. Download the Full Glossary.)