The Earthers' saga, which began with the intertwined series of The Silver Ships and Pyreans, continues in Gate Ghosts and details the colonists of the Con-Fed's colony ship, Destiny. Reading the previous two series will allow a reader to get the most out of this new series.

The descendants of a fourth Earth colony ship, Destiny, successfully establish a foothold in unoccupied space. Naiad, the home world, is a frozen ball, but the colonists persevere and expand through wormholes to remote systems. 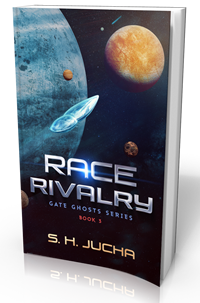 The sisters’ leader, Miriamal, and three mining chairpersons investigate an unexplored wormhole for possible economic expansion. Aboard the Dominance, they exit the wormhole and are stunned to find the nearby system inhabited. More troubling, technologically advanced warships hold station above the system’s ...

The Queller race has lived for millennia in isolation. However, a secret kept by the Queller senior elder and a few associates drives the elder to make contact with another race. Little do the Quellers know that they send a QASAP ship, an autonomous search ship, to engage the conclave.

Escalation is the watchword for the dangerous contest between the Imperium and the conclave. Executors seek the means to push the conclave out of the empire, and desperate measures are taken to design and construct new ships, which are armed with a terrible weapon.

The Sisterhood’s dangerous militarist sect finds a foothold in a broad swath of space inhabited by the descendants of Earth’s fourth colony ship, Destiny. They’re welcomed by corporations, whose leaders see unbridled opportunity in the sisters’ advanced tech.

Human descendants of the Earth colony ship, Destiny, face incursion into their area of space by a powerful race. The Imperium Empire, which is ruled by the Krackus, is one wormhole away from the humans, and a mining planet, Kilmer, would be the alien race's first contact.

The Imperium executors are incensed. They thought to expel the empire’s invaders in a massive onslaught of powerful battleship fleets, the peacekeepers, but the attack failed miserably. Blame is tossed among the assembly. The primary antagonist of the presiding executor, Dakargk, sees an opportunity to oust the leader, Rebtar, in the upcoming election.